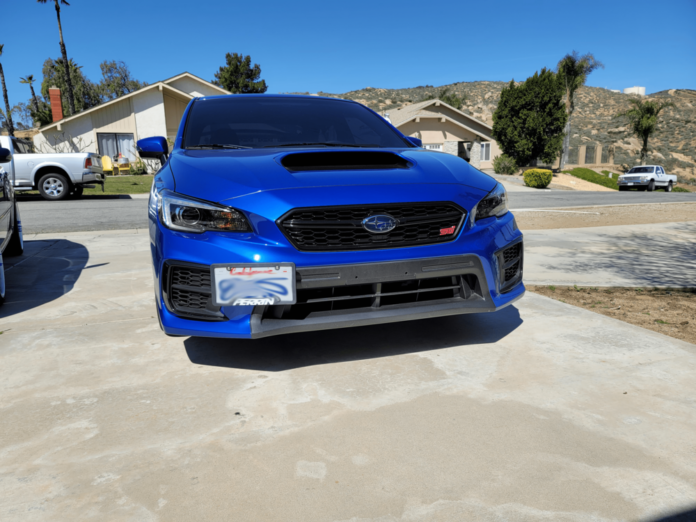 About a decade ago, after the mall parts store JDM tow hooks finally got played out, and fast, manufacturers started to realize they could produce and sell some tow hook technology only previously used by top brands, and on track cars. Introducing….utilization of factory tow hook threading in your frame. Don’t judge me, I did a mall tow hook once, and then took it off after I realized the errors of my ways. 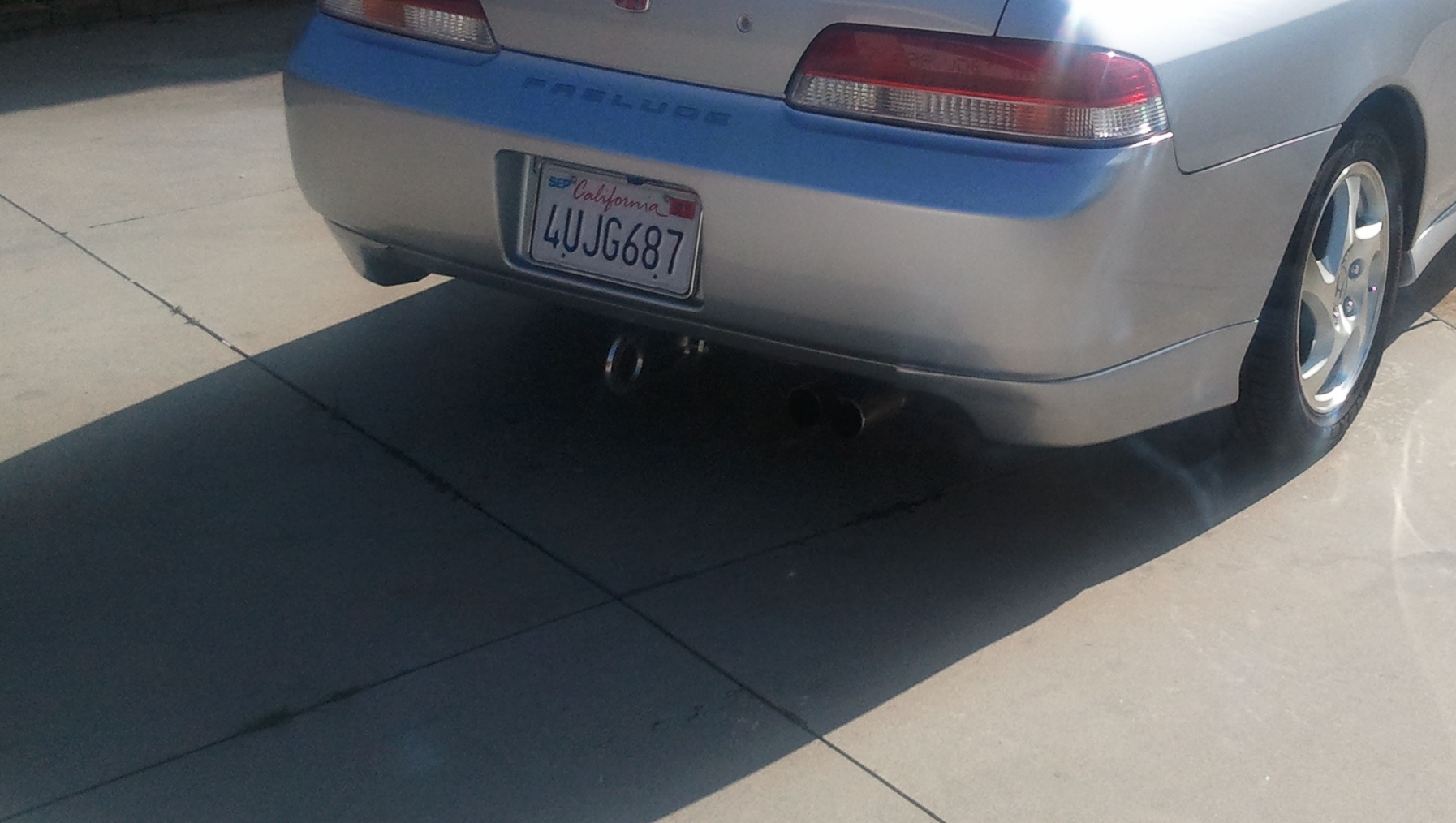 Now we see some awesome tow straps, tow hooks and all kinds of fun stuff you can find on amazon, to spice up your front or rear bumper. Best of all they are functional.

Essentially, most Euro and some JDM cars come with threads tucked away inside your front and rear bumper. Behind a paint matched cover, you can screw in a factory tow hook. These things look ugly, but they do serve the purpose of getting you up on the tow truck bed.

Now the manufacturers are making tow hooks and straps that use the same thread pitch, but look a hell of a lot better. Long story long, this article isn’t about towing…it’s about a license plate frame.

To piggy back on the above movement, manufacturers are also utilizing the same available threading in your frame, to relocate your license plate. The idea is that a long double sided bolt secures into your frame, and then a license plate frame secures on the outer end. Pretty slick. 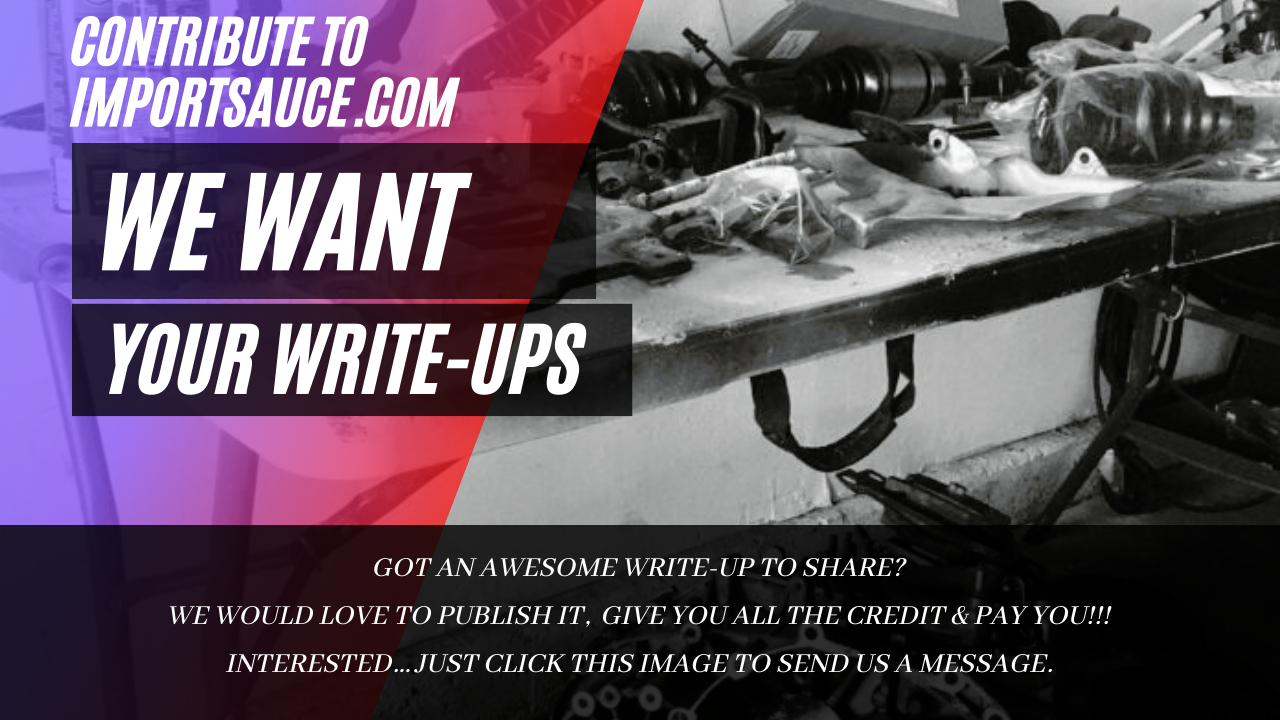 Why do you even want such a thing. Well it can be argued performance and styling….either way it does little, or a lot in both categories…up to you. Free up air flow to your intercooler and rad, or just make your front-end less A-symmetrical.

Here we are going to talk about the Perrin License Plate Relocation kit for Suburu WRXs 2015-2020, but we’re guessing this probably can apply to more vehicles with the same thread pitch.

We bought this kit from MAPerformance.com for just under $90. This was a lot more than other “no name” brands on amazon, and if we had to do it again, we would have tried the
ECOTRIC Dual Position Front License Plate Relocation Holder Kit for a cool $12. We explain more about that in our review at the end.

The product came in a nice box, and immediately we found some detailed instructions. With something like this, we might have normally just went at it, but these were nice as they included a list of tools and such. 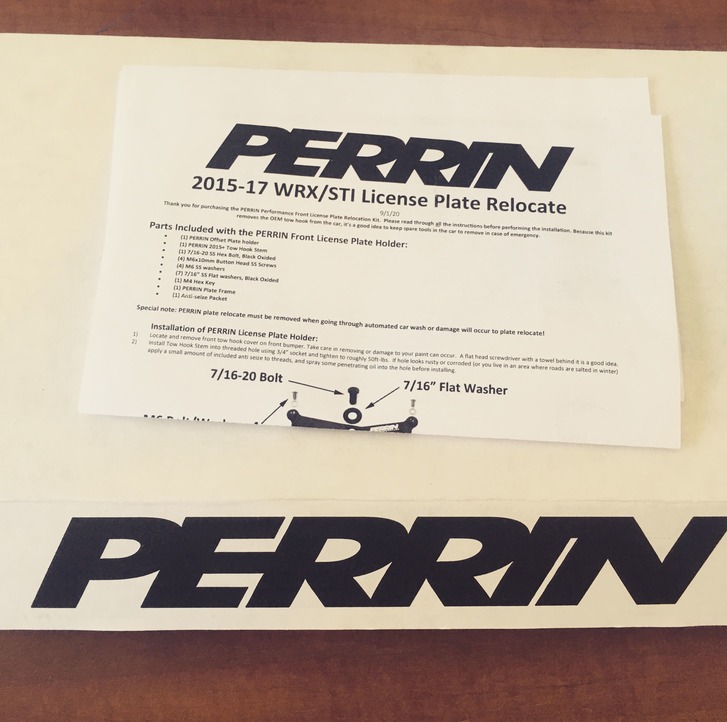 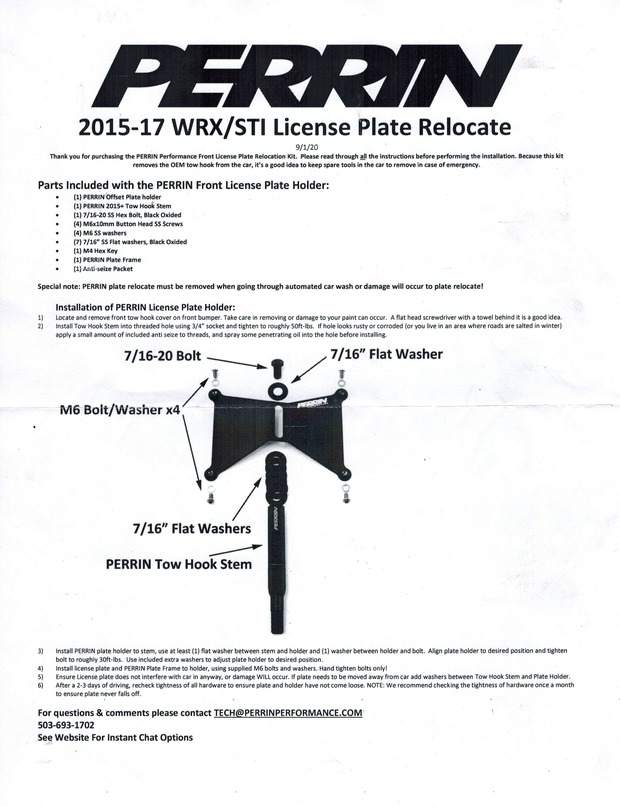 Now we are looking at the product, and hardware all un-boxed, as well as all the tools listed in the instructions to complete the job. This included:
3/8 drive torque wrench
16mm & 19mm socket
A flathead screwdriver or pry tool
A cloth or microfiber towel 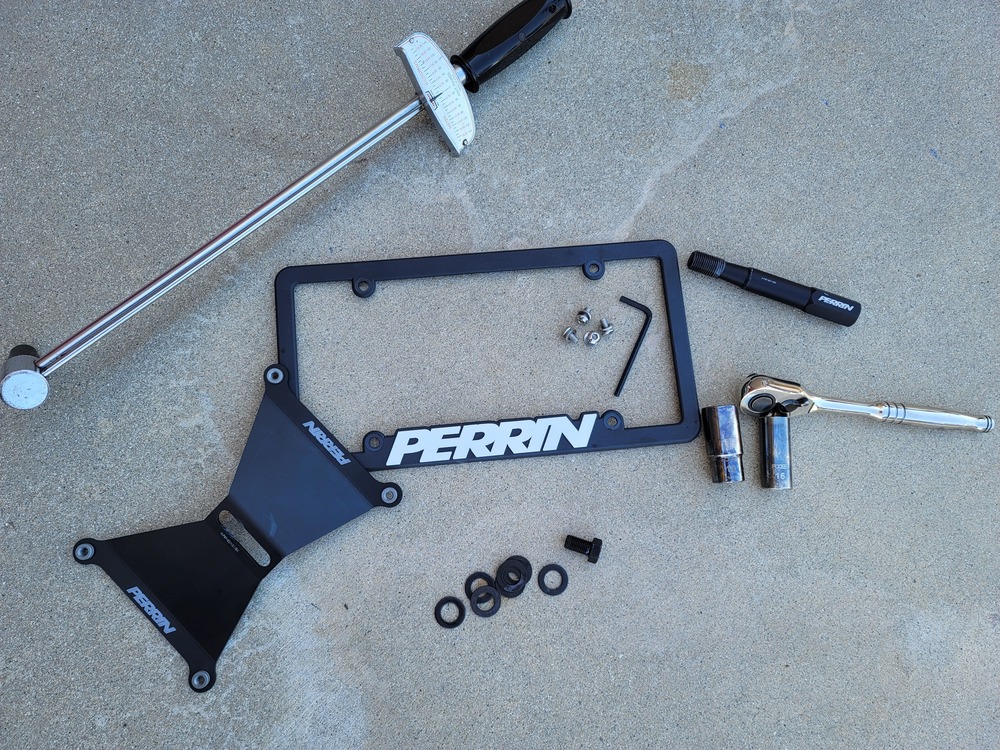 First we will need to get access to the factory tow hitch threads, hiding behind the removable door in the bumper cover. Here we used our flathead screwdriver and then wrapped it in our cloth. This will be easier on the paint, and prevent scratching. 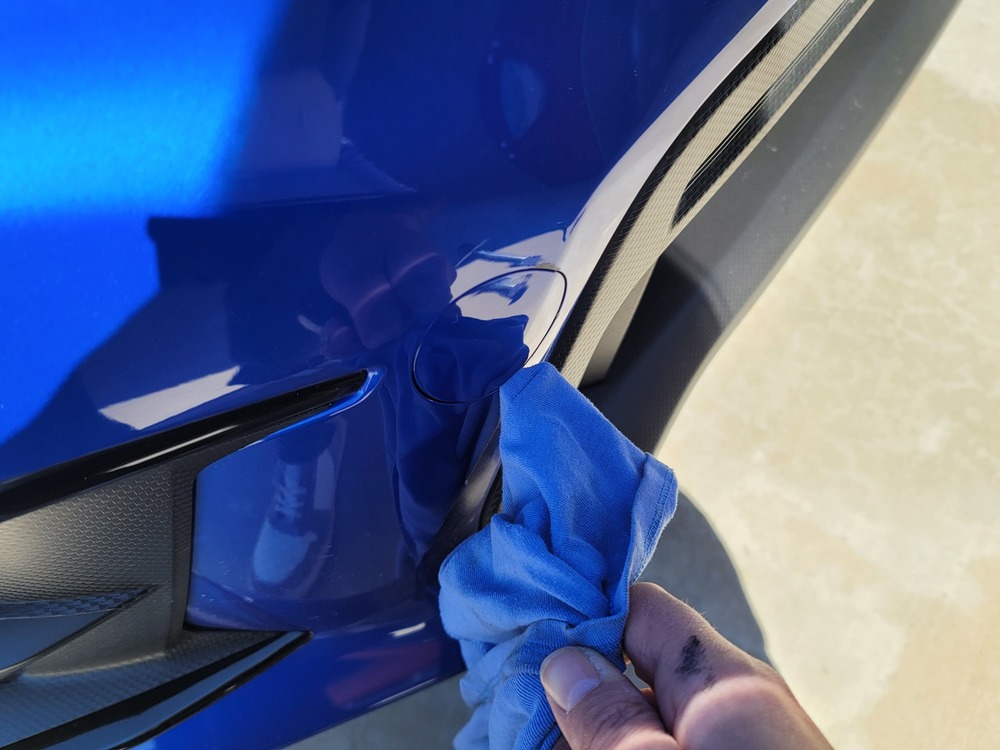 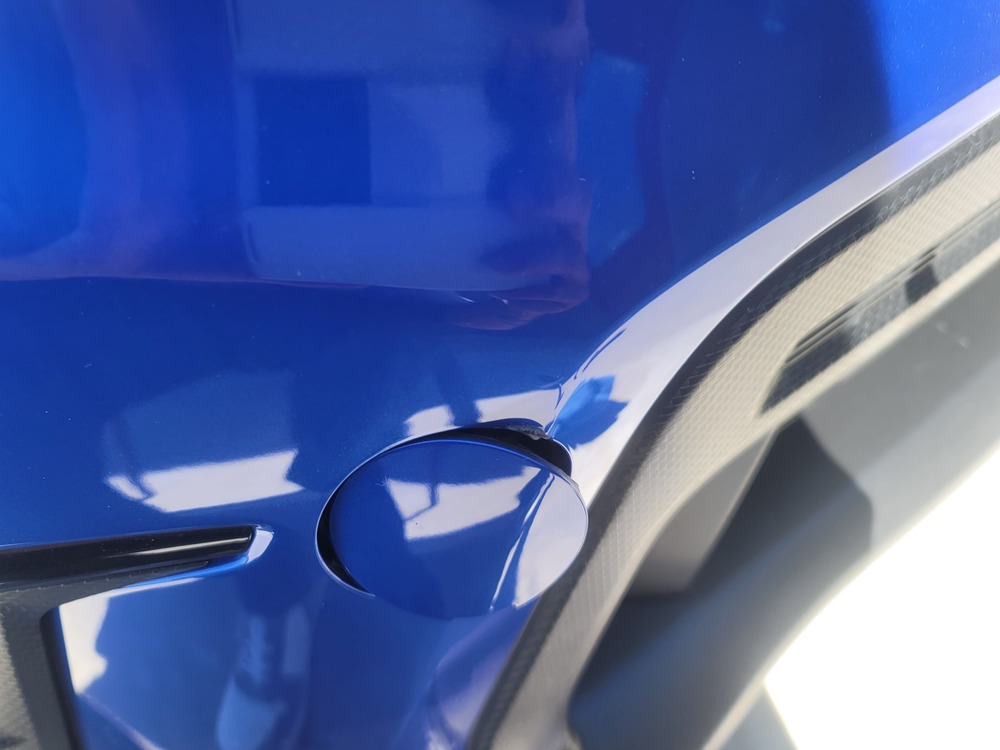 Once the door is popped out, you will see it is held from falling off with an arrow shaped plastic leash. You will pinch the arrow shape to feed it out of its retainer. Put that piece aside to put away in a safe spot. You won’t be putting it back on now, but you’ll want to be able to find it later should you reverse this install. 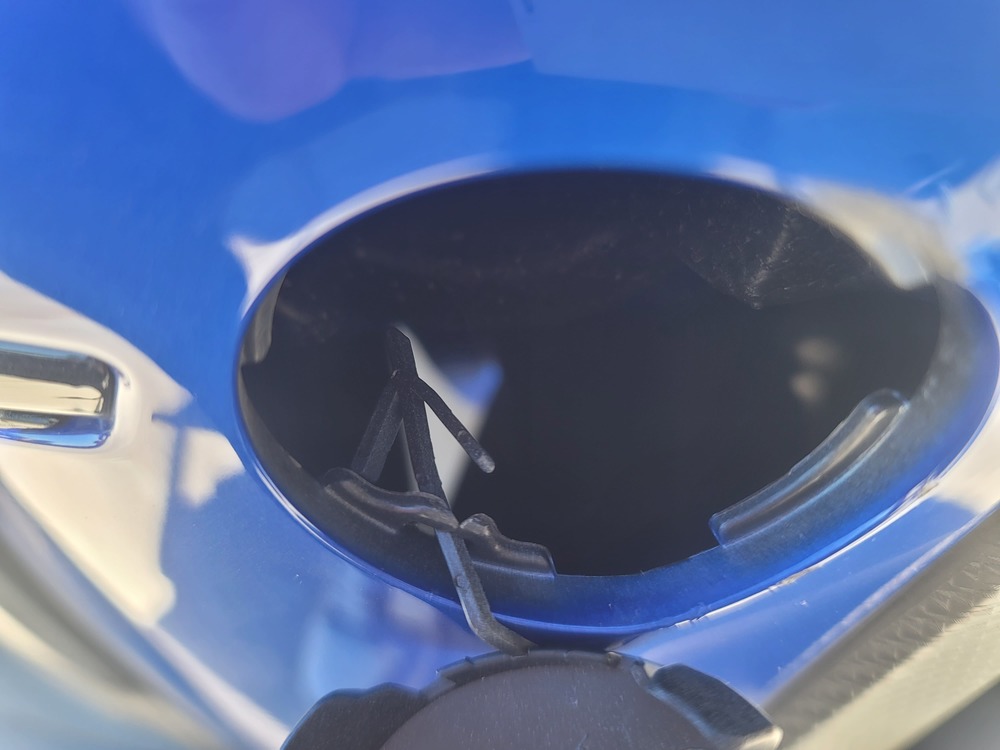 The first step is to find the main bolt which will thread into the factory tow hook threads inside your bumper. Then you can apply the anti-size that was provided in the kit. Per the instructions, we torqued that bolt down to 50ft-lbs. At this point you have what appears to be a dang bolt protruding from your bumper, which is normal. 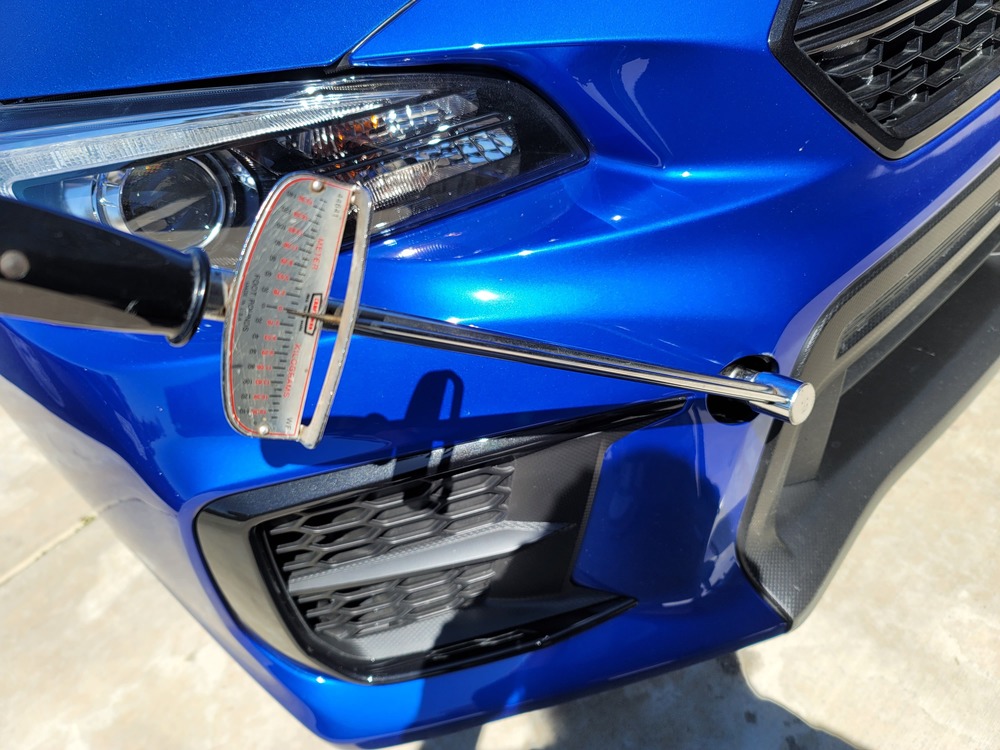 Next step will be to attached the license plat mounting bracket to that bolt. The kit comes with a generous supply of washers… in which we used them all. These washers are to properly space that license plate bracket out away from the bumper. 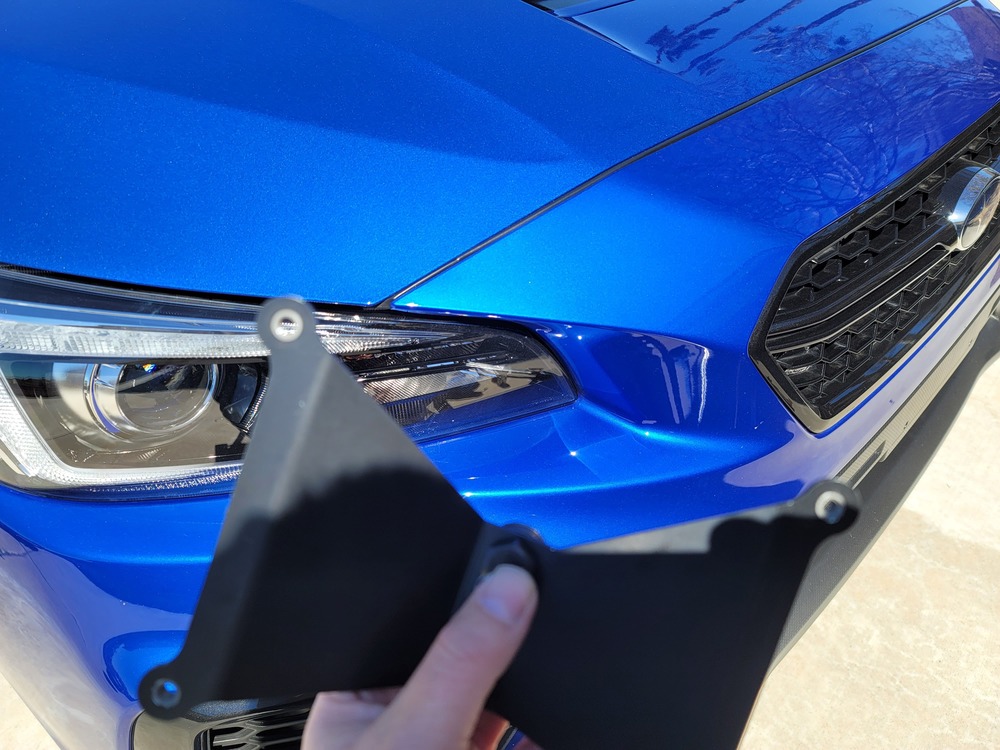 Lastly, we placed the appropriate amount of washers on our remaining bolt, already placed through the license plate frame hole, and secured the frame to the bumper. The real problem here was that the license plate bracket was still touching the bumper, even with all the washers in place. We knew that when we went to torque to frame to the bolt, it was going to push in on our bumper. 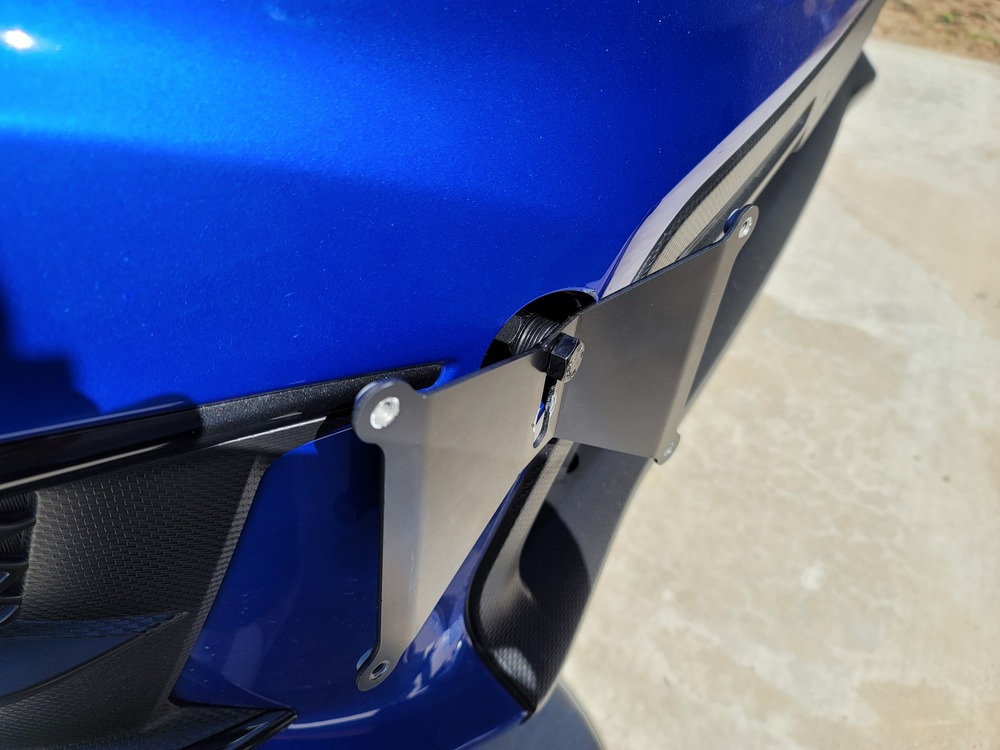 Per the instructions we torqued the license plate frame mount to the tow bolt at 30ft-lbs. Just as we guessed, it was rubbing on the bumper cover. The last thing we want, or you, is a piece of metal putting pressure on your bumper. Side note, this is our brand new 2020 STI, with less than 800 miles on it, and we are already having to damage our perfect factory paint…with a $90 license plate frame. 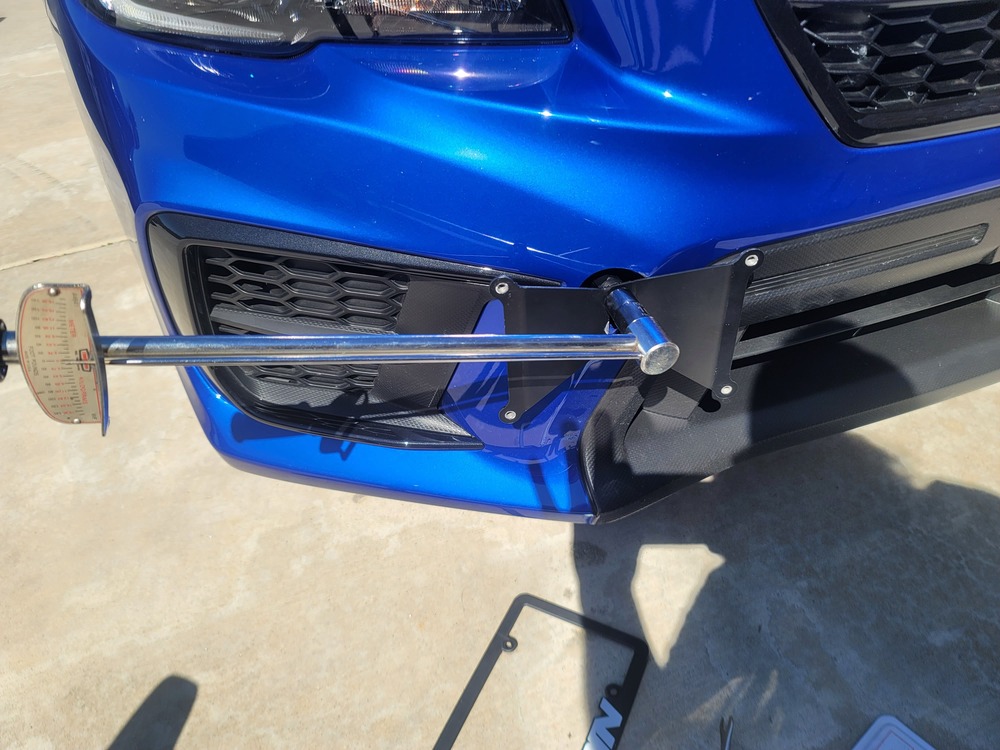 Now that that mess is done, you can place your license plate on the frame, and secure with the hardware provided. Bonus, we got a free Perrin license plate frame. But after we thought about it, and wrote this article, we removed the frame. We aren’t getting paid to rock it, and you all just scratched our bumper.

Before, keep in mind new car, we didn’t even have a license plate yet, but you get the idea. 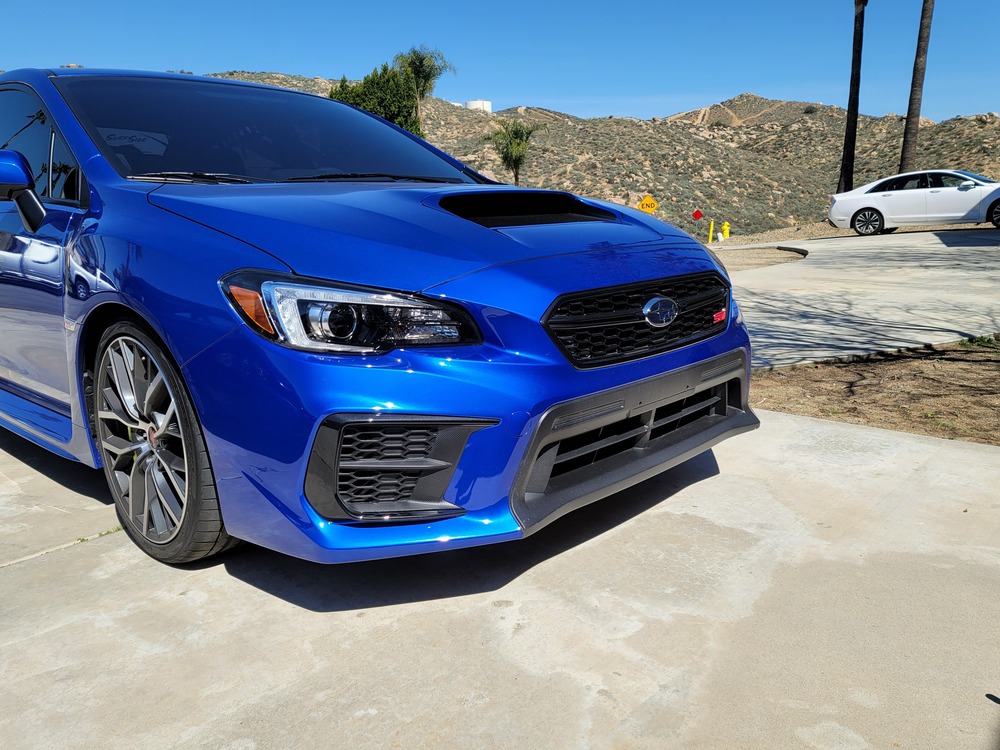 After, style looks good, but maybe not so much for the price. 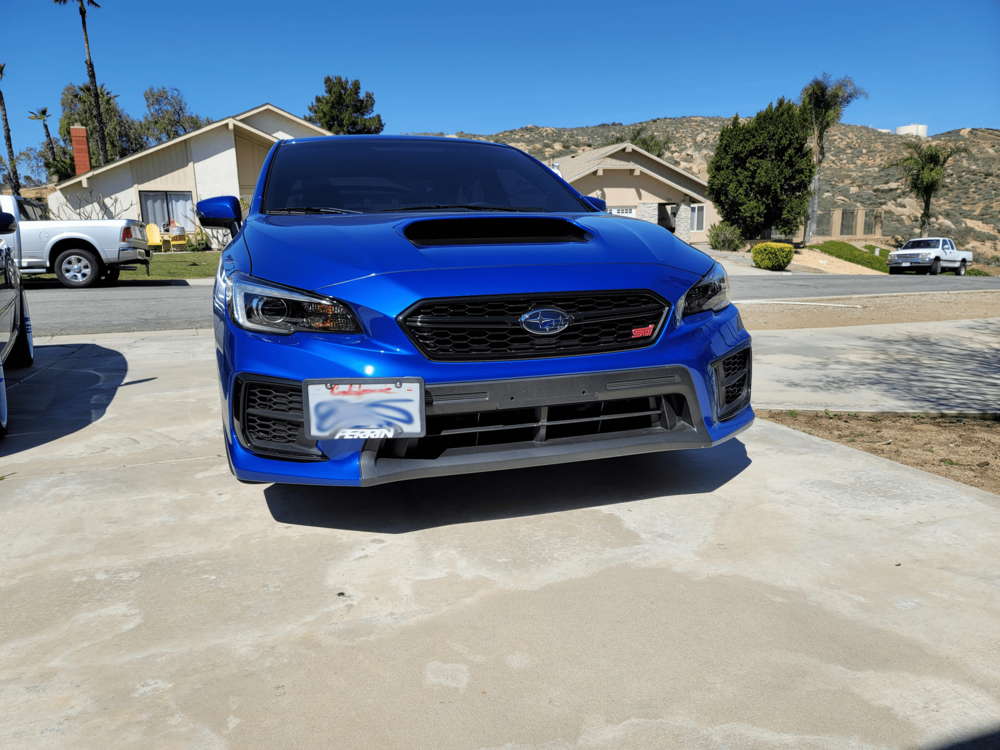 Our review of the Perrin License Plate Relocation Kit

What we didn’t like was that for $90 for a bolt and bracket, it wasn’t properly spaced out from the bumper. Had that bolt been a bit longer, we wouldn’t have the plate bracket jamming into our bumper. With time and road vibrations, we are expecting some possible paint scuff or worse.

Also, the concept is pretty easy. Again, a bolt and a bracket. So for $90 we would expect perfection. Next time, or if someone asks, we would try the generic amazon one, cause at least there, you can return no questions asked.